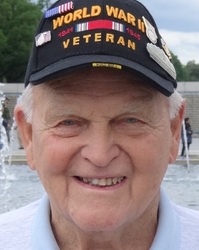 Selwyn E. Harlow Sr., a World War II veteran, passed away on the 4th of July at his Schenectady home. Sel was truly a member of the Greatest Generation. He was 94 years young.

Born in Danube, NY on May 1st, 1928 to the farming family of Willard Harlow and Leona Gyer, Dad learned the values of discipline and hard work at an early age. Enlisting in the Navy at the age of 17, he proudly served as a helmsman on the Destroyer Escort USS Price. In his later years Sel had the privilege of taking an Honor Flight to Washington, DC. He also took a “Dream Flight” in an open cockpit bi plane at the age of 93. After his WW II military service, he graduated from Nott Terrace High School where he enjoyed playing football and basketball.

Sel had a satisfying 37-year career at General Electric, including work as an apprentice, draftsman, quality control specialist, and purchasing agent. He earned a Bachelor’s Degree from Empire State College.

In 1951 Sel married Dorothy Schermerhorn and enjoyed 56 years of marriage before Dorothy passed away in 2007. They were exceptional parents. They are survived by their three children, Selwyn Harlow Jr. (Judy), Scott Harlow (Serena Benson), and Sherry Delgrego. Also, their two grandchildren, Daniel Harlow, and Kent Harlow (Lucia Hutchinson-Trujillo), and nieces Terry Harlow and Kristy Losee (John). Sel was predeceased by his parents, and brothers Harold, Milton, and Elwyn.

Sel and Dorothy’s close-knit family had many wonderful times together. Especially memorable were their annual camping trips to Sacandaga Reservoir and their time spent at the family’s camp on Galway Lake.

His children are grateful for the loving and supportive family life that he and Mom created for us. Even in his last days, Dad exhibited concern for others. He was a kind and charming gentleman who didn’t see strangers… only friends that he hadn’t met yet.

Visitation hours and a prayer service will be held at Bond Funeral Home 1614 Guilderland Avenue Schenectady on July 21st (Please note date and time change) from 10:30 to 12:30. Masks are requested. Internment is at the Saratoga National Cemetery at 2PM.

To leave a message of condolence, you may go to www.bondfuneralhome.com .