To share your memory on the wall of Rosalie Hughes, sign in using one of the following options:

Print
Rosalie Margaret Hughes, 80, of Schenectady died at Albany Medical Center on August 22, 2020. We think she did it on purpose because we told her not to and she never did like being told what to do.

Born in Nottingham, England in 1940, R... Read More
Rosalie Margaret Hughes, 80, of Schenectady died at Albany Medical Center on August 22, 2020. We think she did it on purpose because we told her not to and she never did like being told what to do.

Born in Nottingham, England in 1940, Rosalie was the daughter of the late Thomas and Mabel (Gilson) Cooper (a bookie/dog trainer and fever nurse, respectively). She was, much to no one’s surprise, descended from royalty, and most certainly acted the part from the day she was born.

Rosalie moved to New York City with her three young sons in the 1960’s, and worked as a barmaid at The Verdict in Brooklyn, where she met her late husband, Joseph Hughes. Together they had one daughter, and the family took up residence in Ozone Park, NY. Rosalie was a waitress at Jahn’s Ice Cream Parlor in Richmond Hill, NY, where she mercilessly threw everyone out at closing time until her retirement in 2004.

Rosalie’s greatest joys were her dogs, the Mets, Rod Stewart, drinking “not too sweet” wine, and on occasion, running from the police. Rosalie loved her nails long and her cigarettes longer. She loved big earrings and even bigger cars. Her fashion philosophy was “if it fastens it fits”, and many a family member was tasked with helping zipper her jeans as she lay flat on the bed.

Rosalie was an excellent cook, and fans of her shepherd’s pie, sauerbraten, and fish and chips will doubly mourn their loss. We can only hope the grandchildren will now forgive her for the year she put pineapple in the Christmas yams. It is, after all, time to get back to talking about the many times she threw the tree clean out of the front door and cancelled Christmas because one, or all, of us had driven her over the edge. One particularly exciting holiday season, the fake fireplace went out of the door behind the tree, much to the surprise of the neighbors.

The annual Christmas Spectacular aside, Rosalie’s season was always summer. With her daughter and eldest two granddaughters loaded into her oversized car, she’d make her way toward Rockaway Beach every chance she got. Once they’d found their perfect spot, it was baby oil for everyone as they roasted their skin to a crisp under the summer sun. Back in the car, hot vinyl searing the children to their seats (seatbelts be damned!), it was time for a stop at Lenny’s Clam Bar. With sand still in their swimsuits, the freshly fried foursome would feast on calamari with medium sauce on the side and, if they were particularly good that day, fresh cannoli. Every Fourth of July she would make her legendary margaritas by the pitcher and host the party of the year in her yard. While we drank to the flag, she drank to the Crown, and everyone left with a new story to tell about what happened at Ros’ house this time.

Rosalie loved her children as fiercely as she loved holding on to grudges and her independence. She lived life on her own terms, and despite being all of 5 feet tall and a size six (don’t question it) she was a force of nature. There was not a soul alive who willingly crossed her. In fact, we are all still afraid we are going to get in trouble for something we said in this obituary.

Aside from her parents and husband, Rosalie is predeceased by her son, Michael T. Stevenson, and countless doted upon pets. She is survived by her sons, Edmund “Kevin” and Troy Stevenson (Iris), her daughter Gail Margaret Hughes-Morey (Gary), grandchildren Melissa Stevenson (Brian Talbot), Melanie Margaret Stevenson, Laura and Troy Timmis, and Nicole Stevenson, and great grandchildren Bennett, Destiny, and Bentley, her beloved dog, Houston, and her best friend Vicky.

There will be a private graveside service for Rosalie’s closest friends and family at Saratoga National Cemetery, in Schuylerville, NY on Wednesday August 26th at 11 am.

In lieu of flowers, think of Rosalie whenever you see the color red or hear the song Hot Legs. You can honor her memory by raising a glass of chardonnay (or a pitcher sized margarita) or by making a donation in her name to the Mohawk Hudson Humane Society, 3 Oakland Avenue, Menands, NY 12204.

The Queen is dead.

Receive notifications about information and event scheduling for Rosalie

We encourage you to share your most beloved memories of Rosalie here, so that the family and other loved ones can always see it. You can upload cherished photographs, or share your favorite stories, and can even comment on those shared by others.

Posted Sep 02, 2020 at 12:00am
I did not know Rosalie but her obituary makes me wish I had. I hate plain, ordinary obituaries. I think she would approve of this one, you did her proud.
Comment Share
Share via:
KT

Posted Aug 31, 2020 at 03:21pm
I knew Ros Ron going to the gym and pool at Sunnyview. Hadn't seen her in a few years as our lives went in different directions. But I ran into her at Walmart just after Christmas and she had fallen and did not look well. She wanted to meet after the first of the year to go to the gym. Many things happened and then the virus came. Now I want to go to the gym and was going to call her next week. Just found out she passed and I am so depressed. We had so many good times together at the pool and our many escapades with her dog Journey. We went to some many places to dinner. I miss her as she was so full of life. What a shock. My deepest sympathy to her whole family.
Comment Share
Share via:
V

Posted Aug 29, 2020 at 01:29pm
You helped us at one of the lowest points of our life. We thank you Roz (raising my glass of wine)
Comment Share
Share via:
BM

Posted Aug 25, 2020 at 09:13pm
I do not know this glorious and wonderful woman, but I am mourning the fact that I never had the honor! What an amazing tribute, to a fabulous soul, and my sympathy goes out to anyone blessed to know her.
Comment Share
Share via:
GM

Thank you so much, Lara! 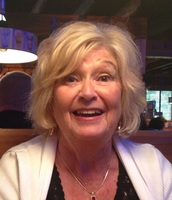