Obituary for Ronald B. Bostwick 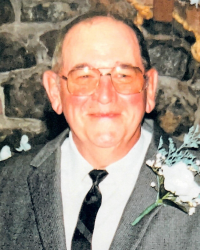 Ronald B. Bostwick 85, passed away on Sunday October 9th at his home in Bethlehem, NY.

Born in Cooperstown, NY, Ron was the son of the late Lee J. and Hazel (Mercer) Bostwick.

An Army veteran during the Vietnam War, Ronald worked for over 33 years for Dagostino Building Block in Schenectady prior to his retirement as a foreman in 1996.

Predeceased by his beloved wife of 51 years, Joyce (Penistan) Bostwick who passed away in 2012, Ronald was also predeceased by his step- son, Richard Fountain and sisters Barbara Hunt and Virginia Dutcher.

Ronald is survived by his daughters, Sherri Orvis (Jeff) of Delanson and Katherine Rupple of Colonie, a step-daughter, Beth Bryant of Charlton, his sister, Marjorie Mercer of Saratoga, grandchildren, Amy, Brandy, Angel, Heather, Chris and Jeffrey, great grandchildren, Christal, Briana, Porter, Parker and Payton and many nieces and nephews.

Funeral services will be held on Monday afternoon October 17th at 1 pm at Bond Funeral Home, Broadway & Guilderland Ave, Schenectady, NY. A visitation for family and friends will be held on Sunday evening October 16th from 6 to 8 pm at the funeral home.

Contributions may be made in his memory to the American Legion Post 31.