To share your memory on the wall of Robert O'Neill, sign in using one of the following options:

Provide comfort for the family of Robert O'Neill with a meaningful gesture of sympathy.

Born in Philadelphia, PA, Robert was the late son of Henry J. and Lenora W. ... Read More
Robert O’Neill, 96, of Schenectady, passed away Thursday, August 22, at the St. Peter’s Hospice Inn, located in Albany NY, surrounded by his loving family.

Moving to Schenectady as a young man, Robert was a member of the Civilian Conservation Corp. where he learned a variety of lifelong trades and skills, his favorite, cooking.

Following his time within the CCC camps, Robert joined the United States Navy. As a World War II Veteran, Robert received the Purple Heart for his heroic actions and bravery while at sea. Forever grateful to his fellow sailors, Robert maintained lifelong friendships with his shipmates, sharing stories and memories for many decades at ship reunions across the US. In June of 2019, Robert was recognized as a Hometown Hero by the city of Schenectady and the DSIC, honoring his service to our country.

Upon his return from war, Robert took great pride in his local community. He worked for 38 years for General Electric’s turbine department, making him a member of the General Electric Quarter Century Club. Due to his great love of nature and the outdoors, Robert was well known in the neighborhood for watching over Hillhurst Park and regularly visiting with its occupants or tending to its gardens. In addition, Robert enjoyed spending time in the Duanesburg countryside, where he spent many hours planting over 1,000 trees, and days mowing his fields, fishing in his pond and photographing wildlife.

Robert will be remembered by all who knew him for his tireless work ethic, his willingness and generosity to help anyone in need, and most importantly for his keen sense of humor and practical jokes.


Besides his parents and siblings, Robert was predeceased in 1998, by the love of his life for over 52 years, Angela C. (Molloy) O’Neill. He was also predeceased by his children whom he so greatly admired, his son, Robert O’Neill and daughter-in- law Joan O’Neill, as well as his daughter Lou-Ann (O’Neill) Marshall.

Robert’s greatest joy was his role as “Pop-Pop” to both his grandchildren and great-grandchildren. Robert is survived by his three loving granddaughters; Lynn Vincent (Joshua), Lori Giattino (Joseph), and Amanda Jo Wilsey (Johnathan) all of Rotterdam. He is also survived by his great-grandchildren; MacKenzie Cartier, Dakota Cartier, Piper Cartier, Jonathan VIncent and Gunnar O’Neill Wilsey. In addition, Robert is survived by his son-in-law Jeffrey Marshall of Rotterdam, his sister-in law, Josephine Shelley of NJ, brother-in law, Robert Malloy of Schenectady, his loving niece Janice Cella of NJ, and will be remembered as “Uncle Bob” to many additional nieces and nephews.

In lieu of flowers contributions may be made in Robert's memory to Community Hospice Inn, 315 S. Manning Blvd., Albany, NY 12208 or to the Boys and Girls Club of Schenectady Summer Program,721 Curry Road, Schenectady, NY 12306.

To leave a message or a condolence for Robert's family please visit www.bondfuneralhome.com
Read Less

We encourage you to share your most beloved memories of Robert here, so that the family and other loved ones can always see it. You can upload cherished photographs, or share your favorite stories, and can even comment on those shared by others. 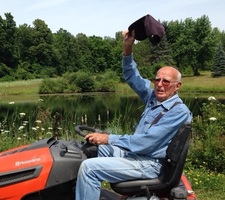