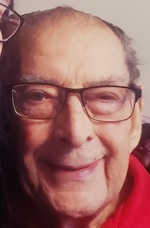 Born and educated in Schenectady, Bob was the son of the late James and Lucy (Roth) Molloy and was a graduate of Mont Pleasant High School.

A United States Army veteran stationed in Germany, Bob was a carpenter by trade and master stair builder. He worked for over 30 years for Country Club Acres in Clifton Park prior to his retirement in 1990.

A member of St Paul’s Episcopal Church in Schenectady, Bob enjoyed playing golf, woodworking, reading and sitting in the sun whenever he could.

Interment with military honors will be held at Evergreen Memorial Park in Colonie, NY.

In lieu of flowers contributions may be made in Bob’s memory to St. Paul’s Episcopal Church or to St Jude’s Children Research Hospital,262 Danny Thomas Place, Memphis, TN,38105.