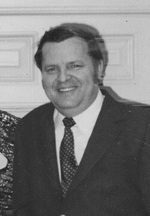 A former Comptroller for the City of Albany, Bob worked for the city for over 25 years prior to his retirement in 1997. A member of the Albany Elks, Bob was an avid Giants Fan, liked listening to Neil Diamond (Bob and Genny's song is Hello my friend) Daffy Duck and his vacations in Vermont. He was a loving and devoted husband, a very caring father, grandfather and babu. He will be so very , very missed.

A celebration of Robert's life will be held with military honors on Sunday February 14th at 4 pm at Bond Funeral Home, Broadway & Guilderland Avenue, Schenectady, NY. A visitation will be held from 3 to 4 pm at the funeral home prior to the services.