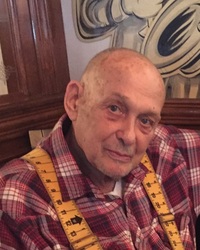 Pastor John P. Richmond Jr., of Morrisville, NY, was called home by our Lord a week short of his 89th birthday surrounded by his family on Monday, January 24, 2022. Born in Baltimore, Maryland, on February 2, 1933, John was the son of the late John P. and Olga (Tesch) Richmond Sr.

John started his career working for Watkins Spring Company and then as a General Manager for Capital Buick. He always felt he had a calling to share his automotive knowledge with others and began working towards a degree in public education. John became a lifelong learner earning two Master’s Degrees in Occupational Education and Fine Arts, and also acquired an Educational Administrative Certification. He became a high school teacher and administrator with Madison Oneida County BOCES, in Verona, NY. He volunteered at RSVP, a senior program in Morrisville, and also taught safe driving and painting classes to community seniors. He was a member and supporter of Grace Lutheran Church in Canastota, NY. Although John ministered to many people throughout his lifetime, he was so proud to be officially ordained to the Gospel ministry in February 2014, at City View Church in Scotia, NY, where you could find him giving the sermon early Sunday mornings. He also assisted his son, Jay in the ministry of Renewal Prayer Network, and he volunteered as the Chaplain of Koinonia Primary Care, a medical clinic in the city of Albany.

When first retiring, John would travel with his wife, Barbara, of 64 years. They travelled to the western United States and then through the southern states where they would stay winters for many years in Gulf Shores, AL, and Garden City, SC. John had many hobbies which included painting, fly tying, collecting and carving antique lures, fishing and reading. He was from a generation that didn’t discard anything that could be fixed and used again. He spread love and prayers wherever he went and to whomever he could, handing out candy, handmade crosses, and gold coins. He was certainly one of a kind and truly loved by his family.

Our family would like to offer a special thank you to Dr. Robert Paeglow, Primary Care Physician at Koinonia Primary Care. Dr. Bob was with the family every step of the way caring for our dad and helping us at any time of day or night. Memorial services to celebrate John’s life will be held on Wednesday April 6th at 2 pm at City View Church,132 Mohawk Ave, Scotia, NY 12302 and in Morrisville, NY, in early Summer. Interment will be in Maple Shade Cemetery in Scotia .