To share your memory on the wall of Naomi Henderson, sign in using one of the following options:

Print
Naomi Mary Henderson (Spotts), daughter of the late Mary and Charles Spotts entered into eternal rest on Thursday May 23, 2019 surrounded by her loving family at Ellis Hospital in Schenectady. Naomi was born on December 9, 1932 in Ghent, NY.

Naomi Mary Henderson (Spotts), daughter of the late Mary and Charles Spotts entered into eternal rest on Thursday May 23, 2019 surrounded by her loving family at Ellis Hospital in Schenectady. Naomi was born on December 9, 1932 in Ghent, NY.

She attended public school in Ghent. In 1946, her family moved to Albany, NY where Naomi attended Phillip Livingston and Albany High School. Soon she quit school and got a job and married the love of her life Mutual “Red” Henderson and started a family raising two wonderful sons. Later Red insisted that she finish school and she graduated with a degree in 1960 from Albany High School. After receiving the diploma, she immediately began working for New York State. She was employed first with Motor Vehicle and then later as a supervisor at the Department of Criminal Justice. She retired after 32 years with the state.

In 1965 her family moved to Rotterdam, NY. Naomi was an avid bowler and was a member of the SSWBA for over 55 years. She was elected the first secretary and was secretary of the year from 1984-85 in the bowling association. Naomi and Red also became active in the Pine Grove fire department.

The most important thing in Naomi’s life was becoming a Jehovah’s Witness on June 7, 1973. She truly loved her God Jehovah!

Besides her loving husband Mutual “Red” Henderson, she is survived by her two sons Bradley (Melody) and Mark (Roseanne) as well as 8 grandchildren and 9 great grandchildren. She is also survived by one honorary son Van Herbert (Judy) and one loving god-daughter Vinita Meadows (Jeff).

Naomi appreciated the love and care of her congregation especially Alta Mastrianni, Stephanie Pischel and her daughter in law Roseanne Henderson.

In addition to her parents she is predeceased by a brother Clarence “Harry” Spotts, two sisters Ruth Mondun and Geraldine Thomas as well as three nephews and three nieces.

A celebration of Naomi’s life will be on Friday May 31, 2019 at 3PM at the Bond Funeral Home 1614 Guilderland Avenue Schenectady. Visitation will precede the service from 2-3PM.

In lieu of flowers, contributions can be made to the Kingdom Hall. To leave a message of condolence, you may go to www.bondfuneralhome.com .
Read Less

We encourage you to share your most beloved memories of Naomi here, so that the family and other loved ones can always see it. You can upload cherished photographs, or share your favorite stories, and can even comment on those shared by others.

Posted May 30, 2019 at 11:43am
I'll miss you good friend. I know you are with Jehovah and are at peace. I have so many great memories especially all of the bowling tournaments. One of the tournaments we went to in my brand new car. We were supposed to drive 100 miles each you drove and never stopped. It is one of my fondest memories of Naomi
And myself. Red, Bradley, and Mark you are in my prayers.

Posted May 26, 2019 at 01:08pm
Bless you Naomi. You are now in heaven with the angels. We all will miss and honor you, for all the years to come. Our love and prayers.

Love, Shelley and Ed Squires and Bob Faragon. purchased flowers for the family of Naomi Henderson. 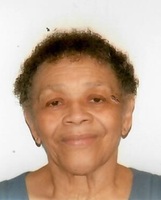