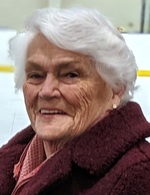 Marilyn Borden, 81, of Rotterdam, passed away suddenly on January 22, 2021 at home. She was born May 13,1939, the only child to the late Hugh and Kathryn (Ammerall) Feenan of Amsterdam, New York.
Marilyn was a graduate of Broadalbin High School. In the Fall of 1958, she married the love of her life, Robert W. Borden Sr., and they were together until his death in 2018.
Marilyn and Bob enjoyed traveling after retirement, spending winters in Myrtle Beach, South Carolina and summers with friends and family at Dun Loggin on the Great Sacandaga Lake.
Marilyn leaves behind her children ~ Cindy Hamilton, Robert W. Borden Jr. (Monica) and Wendy Thorpe. She was fondly known as “Nana” to her grandsons, Garrett Hamilton, Christopher Borden, William and Aaron Thorpe. She also leaves behind her beloved pets Jessie and Samuel.
Besides her parents, Marilyn was also predeceased by her husband Robert W. Borden Sr. (2018), her loving son Michael P. Borden (2017) and son-in-law Gregg P. Hamilton (2018).
A celebration of Marilyn's life, with family and friends, will be scheduled at a later date. Contributions may be made in Marilyn's memory to the Animal Protective Foundation.