To share your memory on the wall of Katherine Collins, sign in using one of the following options:

Provide comfort for the family of Katherine Collins with a meaningful gesture of sympathy.

Kate was born in Utica, NY and was the daughter of Elizabeth Sweeney Ferri... Read More
Katherine Ferriter Collins "Kate", 100, formerly of Scotia and Guilderland, passed away on Tuesday, July 30, 2019 at Kingsway Arms Nursing Center in Schenectady.

Kate was born in Utica, NY and was the daughter of Elizabeth Sweeney Ferriter and James Ferriter. She was a graduate of Faxton Hospital School of Nursing.

After graduation she worked as an RN at Mary Imogene Bassett Hospital in Cooperstown, NY until 1943 when she enlisted in the US Navy, where she served in Nurse Corps until 1946.

Kate also worked at Visiting Nurses of Schenectady, and retired from Teresian House of Albany in 1984.

Kate is also survived by 16 great grandchildren. The family would like to express their sincere thanks to the staff at Kingsway Arms Nursing Center.

A memorial Mass will be held at St. Joseph'sCatholic Church, Scotia, NY at a later date. A private burial will be held at Gerald B. H. Solomon National Cemetery at the convenience of the family.

We encourage you to share your most beloved memories of Katherine here, so that the family and other loved ones can always see it. You can upload cherished photographs, or share your favorite stories, and can even comment on those shared by others. 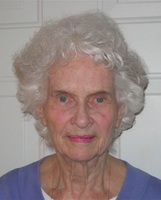