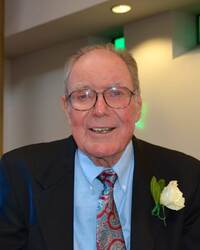 John P. Walsh, passed away on July 18, 2022 at home after a brief illness. Formerly of Olean and Allegany, New York, he relocated to Loudonville, New York several years ago.

He was born on October 5, 1929 to Celia M. Phillips Walsh and John J. Walsh. He attended St. Bonaventure Parochial School and Allegany High School. He served in the US Navy from 1947 to 1951 as a signalman in the Atlantic and Mediterranean Fleets. Following his service, he received a BA from Miami University, Oxford, Ohio and an MA from St. Bonaventure University.

For three years, he was a college bookman for J.B. Lippincott publishing company in the southeast where he met Jillian Becket, an English nurse working in Alabama. They were wed in St. Paul’s Cathedral, Birmingham, Alabama in 1960.

He began his 30-year career as an English teacher at Ellicottville High School in 1961 and retired from Allegany Central School in 1991.

He was a proud member of the Ancient Order of Hibernians, Cattaraugus County, Division 2, where he served as Recording Secretary, Historian and Sick and Bereavement Committee Chairman. He was chairman of the organization’s Irish Famine Memorial Committee and instrumental in the building of the famine monument erected in War Veterans Park in Olean, New York. He was also a longtime member of the Knights of Columbus, the American Legion and St. Mary of the Angels church in Olean.

John had a great love of History, particularly Irish History and the Irish famine that brought great numbers of Irish to the US. He enjoyed attending Scottish Festivals and Games throughout the Eastern seaboard with his wife. For a time, he organized Scottish piping lessons at his AOH Division. He inherited a love of Opera from his father as well as his love of baseball and his Yankees.

Donations can be made to: Ancient Order of Hibernians, Cattaraugus County, Division 2, PO Box 37, Olean, NY 14760.

Arrangements are by the Bond Funeral Home 1614 Guilderland Avenue Schenectady