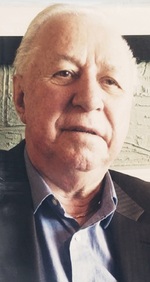 Born and educated in Schenectady, John was the son of the late John F. and Bernice (Yaniec) Macejka Sr. He was a 1953 graduate of Mont Pleasant High School and received an associate’s degree from Albany Business College.

A United States Army veteran, John retired in 1990 from Beneficial Finance Corporation in Rotterdam as a senior manager after 36 years of service.

Predeceased in 2002 by his wife Maureen L. (Lyons) Macejka, John is survived by his children, Deborah Burrows of Rotterdam and Patricia DuPont (Kenneth) of Elkton, VA, his grandchildren, Johnny and Shelby Burrows of Rotterdam and Melissa Aldrich of VA, his great grandchildren, Natalee and Alan, his siblings, Steve Macejka (Patricia) of Myrtle Beach, SC and Edward Macejka (Christine) and Anna Harnage both of Panama City, FL. and many nieces and nephews.

Entombment will follow in Most Holy Redeemer Mausoleum with full military honors.