To share your memory on the wall of Jillian Walsh, sign in using one of the following options:

Born June 5, 1930 in London, England to Frank H. and Jean Jarrett Becket. She attended schools in London and Ipswich, England and received degrees in nursing and midwifery from the Radcliffe Infirmary in Oxford, England and the London Hospital.

She emigrated to the United States in 1956 and in 1960, in St. Paul’s Cathedral in Birmingham Alabama, she married John P. Walsh. She became a United States citizen in 1998 in Buffalo, New York.

She was employed for many years at the former St. Francis Hospital in Olean, New York. She was a member of St. Mary of the Angels Church and the Ladies Ancient Order of Hibernians.

She is survived by her husband and three children, Margaret (Richard) Eckhardt of Guilderland, New York, Bridget (Rick Paluck) Walsh of Loudonville, New York and Matthew of Wolcott, New York and three grandchildren, Janet, Gregory and Elizabeth Eckhardt and a sister Susan of Norfolk, England. She was predeceased by her parents, her sister Pauline and a son, John T. Walsh.

The family would like to express gratitude for Hospice of Albany County and especially Cory who provided gentle care.

In lieu of flowers, memorial contributions may be made in Jillian’s name to Interfaith Caregivers of Olean, NY, Community Hospice of Albany or donor’s choice.

We encourage you to share your most beloved memories of Jillian here, so that the family and other loved ones can always see it. You can upload cherished photographs, or share your favorite stories, and can even comment on those shared by others.

Posted Nov 26, 2019 at 05:53pm
We were neighbors with the Walshes for many years in Olean. We missed them when they moved. We are so sad to hear is Mrs. Walsh's passing. Condolences to the family. Jim and Tina Farmer
Comment Share
Share via:
K

Posted Oct 24, 2019 at 10:06pm
Dear Meg,
I am saddened to hear of your Mother’s passing. You and your family are in my thoughts and prayers. My deepest sympathies.
Kathy Kinnaird
Buffalo, NY
Comment Share
Share via:
HM

Posted Oct 24, 2019 at 05:21pm
Brendan and I send our condolences. Jill was a beloved wife, mother, and grandmother. Our prayers to her family. She will be missed and remembered. My God bless her.
Comment Share
Share via:
JW

Posted Oct 23, 2019 at 08:05am
Jill always had a bright smile and a sparkling hello for everyone -- she was certainly a wonderful lady! John, I do know how much you will miss her -- and how big and deep the hole is - but she is out of pain and is a new angel -- what a blessing! 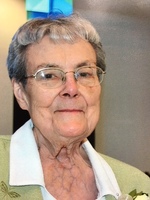