To share your memory on the wall of Jeanette LeFevre, sign in using one of the following options:

Jeanette was married to the late Donald LeFevre Sr. and created a family of five. They lived in Albany and Rotterdam, New York.

Jeanette was a faithful member of Welcome Chapel Missionary Baptist Church. She served the church as a church clerk, a missionary, a chairman of the trustee board, and was always willing to serve in any capacity.
Jeanette was a founding member of Capital District Assembly No. 60, which first started in 1974. She was a member for 46 years. Jeanette was also a Past Loyal Lady Ruler with the Order of the Golden Circle. She was referred to as PLLR Jeanette LeFevre. She served as a treasurer until she moved to New Jersey.
She worked at Albany Public Market, Shoprite, and Walmart. She was well known for her kind demeanor, giving heart, and love for people. The word that described her best is: Giving!

On a nice day, Jeanette could often be found soaking up the sun, or as she called it “sitting on the dock of the bay,” with her sidekick, Zack. Sometimes, she liked to play solitaire. She was great at crocheting. Her green thumb resulted in the sprouting of numerous plants. In the evening, Jeanette enjoyed watching television shows such as Blue Bloods, General Hospital, Say Yes to the Dress, and Love and Hip Hop.

Jeanette touched so many lives during her time here on earth. What she loved the most was God and her Family. During her talks with the Lord, Jeanette often said: “Thank ya! Thank ya! Thank ya!” Although we will miss her dearly, we know that she has earned her wings and can rest easy now.

To meet Jeanette was to simply fall in love with her.
Read Less

We encourage you to share your most beloved memories of Jeanette here, so that the family and other loved ones can always see it. You can upload cherished photographs, or share your favorite stories, and can even comment on those shared by others.

Posted Mar 19, 2020 at 02:51pm
The lefevre family was my neighbors for years, all great people. Jeanette was always a good person calling me Bono!
Comment Share
Share via:
FA

Posted Mar 18, 2020 at 10:07am
I work with Ms Jeanette at Albany Public Market in 1977, became family photographer and always felt like part of family. Ms Jeanette, U will always have a special place in my heart
Comment Share
Share via:
BM

So sorry for your loss. 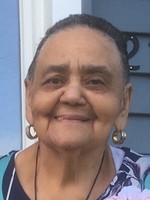