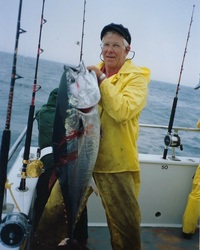 John “Jack” “Jacksun” Osterlitz left for another adventure on October 2, 2022.

He left from home wishing his family and friends God speed in all their hopes, dreams and desires.

Jack was born in 1936 to the late John and Velda Osterlitz (Perry) and grew up in Schenectady graduating from Nott Terrace High School in 1954.

Jacks love of life and people allowed him to pursue life to its fullest. He was a sportsman and loved the outdoors, catching his first fish at age 7, to shooting woodchucks on his uncle’s farm at 11. He built his first boat, climbed his first mountain, shot his first deer and bought his first car as a teenager.

He met the love of his life Sylvia Krajewski in 1957 and after serving in the Navy, they were married in 1959. Sylvia was Jacks greatest treasure and life companion. They raised a daughter Beth and sons Michael, Mark and Christopher on Glenville hill.

Jack learned carpentry skills from his father. They tore down an old horse barn and used its lumber to build a home in Glenville in 1952. Using those skills, he rebuilt the house that he and Sylvia bought nearby, complete with additions, cabinets and furniture using some of the wood from that same barn. Those skills and ability to be independent were also passed on to their children. Jack treasured Sylvia and her family. He felt humbled and lucky to have fallen in love on their first date.

Jack was very proud of his family. He led his family on a six-year quest to climb the 46 high peaks of the Adirondacks. All six of them became ADK 46ers, making them the first family of six to start and finish together. They planted, grew and sold Christmas trees, learned how to swim, skate and fish in their pond, care for and ride horses, and grow crops all on their land. He was a proud dad, cheerleading at their basketball and hockey games. He supported his sons throughout the scouting programs raising three Eagle Scouts. The family took yearly vacations to the ocean and the mountains. They made a cross country trip in the family station wagon with a homemade wooden box on top for camping gear.

He worked for The National Cash Register Company as a field engineer for 39 years. He turned down managerial promotions due to his passion for serving his customers and utilizing his mechanical and computer skills.

No opportunity to gather people together, honor someone, or just have a good time went by without his involvement. His many friends were a valued part of his life. His love of life led to him to organize family reunions, mountain climbing and ocean fishing trips, Canadian big game hunts and fly in fishing adventures. He enjoyed six trips to Alaska, three with the camper and a fold-a-boat. He started downhill skiing at age 54, stopping at age 84, after many ski trips out west and to Austria.

A side job allowed him to purchase an ocean-going boat, which he operated for many years, fishing offshore for tuna, cod and haddock. He took great pleasure in taking friends with him as often as he could. The many video and slide shows of his fishing and skiing adventures exist today as fond memories and a guide as to how to live life and do good things.

Jack was very proud to be born an Osterlitz. Both his maternal and fraternal grandparents were near and dear to him. Living through the great depression, they instilled in him a special appreciation for life. His aunts, uncles and cousins were near and dear to him as well. After retiring, his Dutch/ German heritage led him to venture into brewing beer, growing a variety of hops and adding ingredients from his land to create his one of a kind brews.

He is survived by his loving wife of 63 years, Sylvia and their children, Michael Osterlitz of Schenectady, Beth Scavone (Mark) of Saratoga Springs, Mark Osterlitz (Ruth) of Ballston Lake, Christopher Osterlitz (Linda) of Eugene, OR, and his grandchildren, Andrew, Anthony, David, Jonathan, Logan, Eli and great granddaughter Eleanor. He is also survived by his sister Jane Pauzé (Richard) and many nieces, nephews, cousins and dear friends.

The family will receive relatives and friends from 6 - 8 p.m. Friday, October 14, 2022 at the Bond Funeral Home 1614 Guilderland Ave, Schenectady, NY. The Mass will be held at 9:30 a.m. Saturday, October 15, 2022 at the St Joseph’s Catholic Church 231 2nd St., Scotia NY with Father Thomas Konopka, Pastor. Interment will be at the Most Holy Redeemer Cemetery. A Celebration of Life will follow, full of laughter, music, and great memories just the way he would want it.

Being diagnosed late in life, Jack fought a hard battle with ALS. In lieu of flowers, donations can be made to St. Peters ALS Regional Center. The family would like to thank Dr. John Pezzulo for decades of wonderful care. Special thanks to Dr. Shawn Jorgensen, Stacey McHale-McBain, FNP and his favorite nurse Kathy.