To share your memory on the wall of Barbara Leone, sign in using one of the following options:

Print
Barbara F. Leone, 89, passed away on Sunday October 18th at the Schenectady Center for Nursing and Rehabilitation after a long Illness.

Born in Schenectady, Barbara was the daughter of the late Emil and Teresa (Griesmer) Moser and a gra... Read More
Barbara F. Leone, 89, passed away on Sunday October 18th at the Schenectady Center for Nursing and Rehabilitation after a long Illness.

Born in Schenectady, Barbara was the daughter of the late Emil and Teresa (Griesmer) Moser and a graduate of the former Draper High School.

The former meal site manager for Catholic Charities in Schenectady and at St Stephen’s Church for over 30 years, Barbara was a member of the former Immaculate Conception church in Schenectady. She was devoted to her family and cherished her children, grandchildren and great grandchildren.

Beside her parents, Barbara was predeceased by her brother and sister-in-law, Donald and Rosalyn Moser. She is survived by her children, John L. Leone (Kathy) of Rotterdam,Terry Vanosky (Dave) of Rotterdam, LouAnn Palmer (Kevin) of Rotterdam and MaryAnn Jurewicz (Mike Becker) of Hubert, NC, 9 grandchildren,8 great grandchildren and many nieces and nephews.

Funeral services for Barbara will be held private at the convenience of her family.

Interment will be in St. Cyril’s Cemetery in Rotterdam, NY.

Barbara’s family would like thank all of the caregivers in the Willow Unit at the Schenectady Center for all of their care and compassion shown to their mother during her stay at the center.

In lieu of flowers contributions may be made in Barbara’s memory to the Heritage Home for Women, 1519 Union Street, Schenectady, NY 12309 (https://www.heritagehome4women.net/ )

To leave a message or a condolence for Barbara’s family please visit www.bondfuneralhome.com
Read Less

Receive notifications about information and event scheduling for Barbara

We encourage you to share your most beloved memories of Barbara here, so that the family and other loved ones can always see it. You can upload cherished photographs, or share your favorite stories, and can even comment on those shared by others.

Posted Oct 22, 2020 at 03:06pm
Johnny, so sorry to hear of your mom’s passing. We only get one, and I’m sure she was a special lady. My condolences to you and your entire family at this difficult time. Hold on to those special moments you shared with her close to your heart and she will always be with you. The General and Susan Mennillo
Comment Share
Share via:
MW

Posted Oct 21, 2020 at 10:29am
When I was at Catholic Charities, I met your mom. She was a doll and so helpful with her meal site. Barbara was always there to help anyone with anything. She was so well liked that everyone wanted to come to her meal site. She was a true angel among us and I know your family will miss her. My thoughts are with you. Mary Lynn Walcesky.
Comment Share
Share via:
MJ

Posted Oct 20, 2020 at 09:32pm
MaryAnn and family. Sending you heart felt condolences. You are in my thoughts and prayers. God Bless you and your family. Lori Pfaffenbach Fyvie
Comment Share
Share via:
ND

Posted Oct 20, 2020 at 08:51pm
Louann and family, so sorry to hear about your mother's passing. I have wonderful memories of your Mom serving seniors as a meal site manager for Catholic Charities, she was always a lot of fun. And then to reconnect with her and meet you was an additional blessing. She will be remembered as a very sweet & kind lady who raised a sweet and kind family.
Comment Share
Share via: 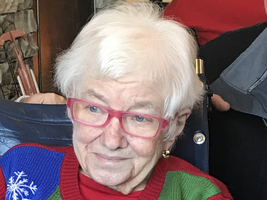