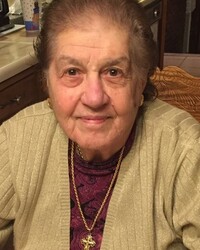 In Memory of Arcangela Campagnano

After more than 89 blessed years here on earth, Arcangela (Viscusi) Campagnano joined God in Heaven on November 8, 2022, after a brief illness. The second eldest of seven siblings, she was born to Zelindo Antonio and Clelia Maria (Ulino) Viscusi on March 5, 1933. Arcangela was raised and educated until graduation in Squille, Caserta, Italy. Arcangela is loved and revered by her family, including her large extended family both in Italy and America.

Arcangela married the love of her life, Francesco Campagnano on October 8, 1953, in their hometown of Squille, Caserta, Italy. In February of 1967, the couple and their 3 children set sail for a 13-day cruise from Naples and Genoa, Italy to arrive in New York City on March 10, 1967. They then settled in Schenectady the very next day where she and her husband remained. The couple went on to celebrate more than 61 years of marriage until Francesco predeceased her in May 2015.

She worked as a seamstress at Cheltingham Apparel Co. for many years. She took great pleasure in constructing wonderful creations from fabric for her family and friends. A member of the Sons of Italy in Rotterdam, NY, her greatest loves, however, were gardening with her husband and cooking for all those that knew her. Arcangela was a member of the former Our Lady of the Assumption Church and presently Our Lady Queen of Peace Church in Rotterdam, NY. She loved to travel to FESTA and CELEBRATE THE CHURCHES, CATHEDRALS AND BASILICAS in other cities of Italy, New York, New Jersey, Massachusetts, Pennsylvania and Quebec, Canada.

Her greatest joy in life was her family including her beloved husband Francesco, her sons Antonio Z. and Maurizio (Tammy Jo) and daughter Maria A. all of Rotterdam, NY. She also leaves behind cherished grandsons Frank and Anthony (Diana) Campagnano, step-grandsons Richard (Miranda) and Tyler (Mackenzie) Chewens and step-great grandson Cameron Chewens along with many nieces and nephews whom she adored.

Visitation will be held at Bond Funeral Home, 1614 Guilderland Ave., Schenectady on Saturday November 19 from 9am – 11am with a prayer service at 11am followed by entombment in Schenectady Memorial Park and Terrace Garden, Rotterdam.

In lieu of flowers, family requests donations be made in her memory to The Community Hospice of Schenectady, 445 New Karner Rd. Albany NY 12205.